With all the attention on new ships, it's easy to forget that our current fleet continues in service and will do so for many years to come.

The last of Australia's Anzac class frigates to pass through the Anti-Ship Missile Defence upgrade programme, HMAS Stuart, has entered the Henderson yard in WA to commence her refit.

HMAS Parramatta undocked on the 29th of April, 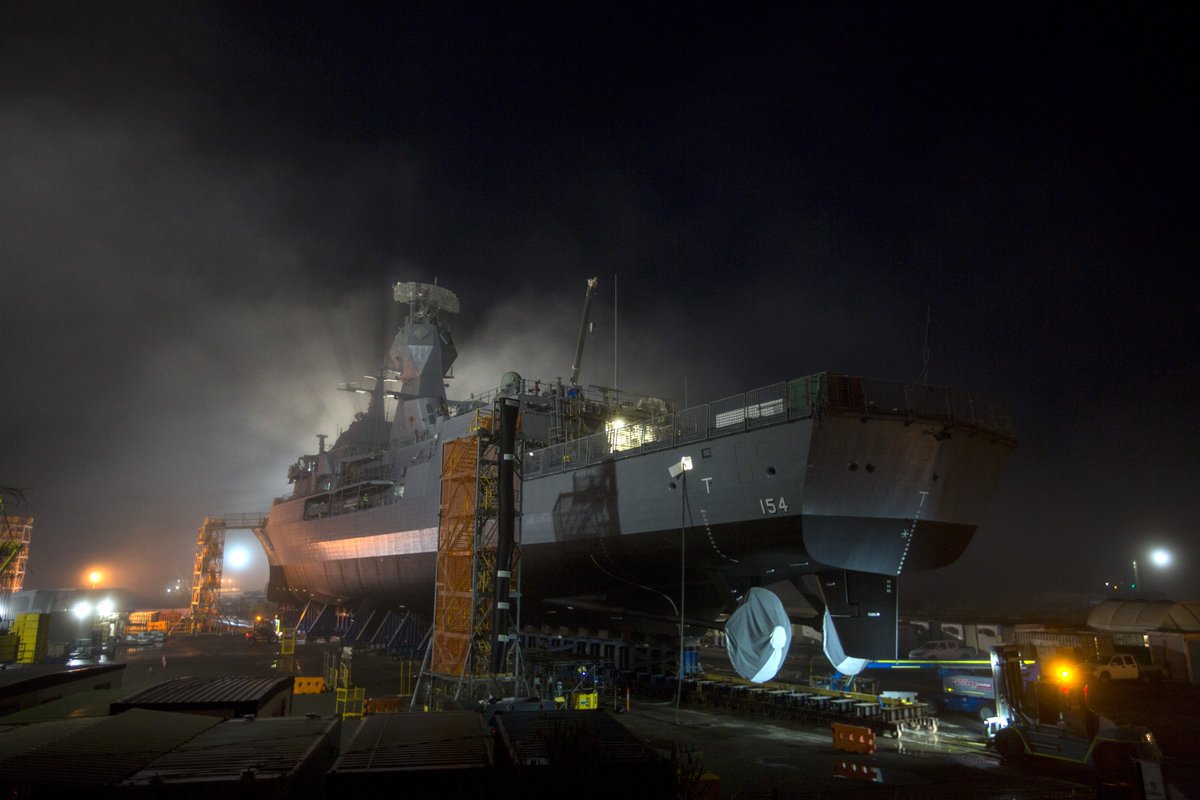 freeing up space for Stuart to take her place as seen here on May 6. 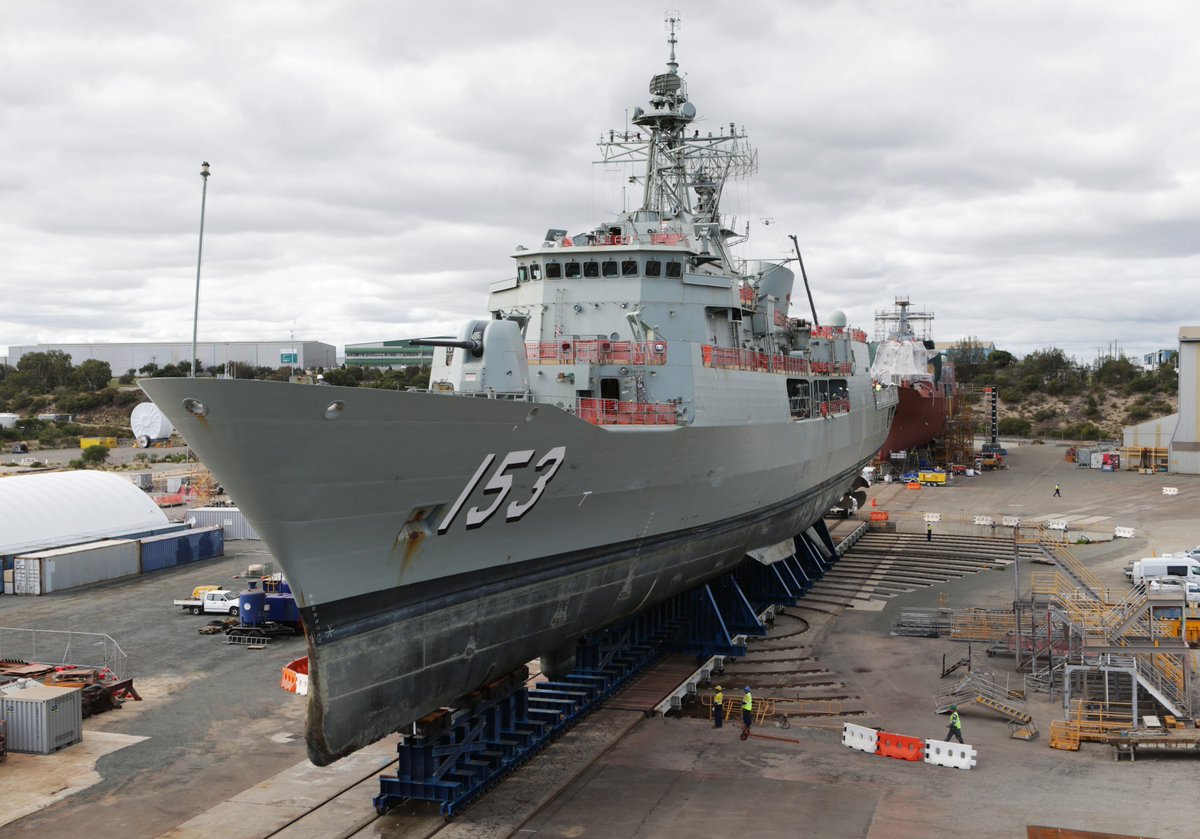 Once complete all of the Anzac's will have the new phased array radar system and the associated mast, the enclosed quarterdeck and numerous other changes from the baseline Anzac's we're all familiar with.

It also leaves the RNZN's Anzacs significantly less capable in the modern naval environment by comparison.

I believe the KIWI ANZACs will commence an upgrade later this year. It is being done on the west coast of Canada. I know Thyssen Krupp are involved in the project. We've been asked about doing a model of it but haven't seen the plans as yet as they are still working on it all. Not as big an upgrade as our ASMD project though.
Top

A great video of the HMAS Stuart docking

Description
The ANZAC FSU project will upgrade the surveillance, combat and self-defence capabilities of the ANZAC frigates to match current and future threats and address obsolescence of some of the current systems. This will include a new combat management system, new radars, electronic detection and other above water sensors, the self-defence missile system, decoys against missiles and torpedoes, and an upgrade to the hull-mounted sonar.

Government approval
On 14 April 2014, Cabinet provided approval for the Project to commit to contract at a total project cost of $446 million including project management costs, contingency, introduction into service and capitalisation costs. The project is being funded from with the NZDF’s baseline as part of the Defence Capability Plan. There will be a number of separate contracts covering various aspects of the project including for the Prime System Integrator, preliminary design, missiles, sonar upgrade, torpedo defence system and anti-ship missile defence decoys.

Contracts
Prime System Integrator. Following an international open tender process in March-May 2013, Due Diligence, a Contract Definition phase and Best and Final Offer (BAFO) process, Lockheed Martin Canada (LMC) was awarded a contract on 29 April 2014 for the design and supply of the Combat Management System for each ANZAC Class Frigate along with the supply and integration of various sensors, missile system and a Combat System Trainer for the Devonport Naval Base in Auckland. The Combat Management System and many of the sensors are the same as those being provided for the current upgrade of the 12 Canadian Navy Halifax Class frigates which is also being undertaken by LMC.

Preliminary Design. A contract was awarded to Thyssenkrupp Marine Systems Australia (TKMSA) Pty Ltd on 20 May 2104 for the preliminary design phase. This activity addresses the mast and upper deck design, compartment layout and physical integration of the new and legacy systems.

Missiles. A contract was awarded to MBDA (UK) on 21 May 2014 for the provision of the Sea Ceptor vertical launched, active Common Anti-Air Modular Missile (Maritime) - CAMM(M) which will replace the current RIM7P NATO Seasparrow missile system.

Sonar and Underwater Telephone Upgrade. A contract was awarded to Thales Australia Ltd on 11 June 2014 for the provision of the Broadband Sonar Advanced Processing System (BSAPS) for the Spherion B hull mounted sonar and the TUUM-6 multi-channel Digital Underwater Communication System (DUWCS).

Anti-ship Missile Defence Decoys. A contract was awarded to Airborne Systems Limited on 3 July 2014 for the provision of certain anti-ship missile defence soft kill subsystems, along with training and support, spares, support and test equipment, and full documentation.

Torpedo Defence System. A contract was awarded to Ultra Electronics Limited on 11 July 2014 for the provision of certain underwater defence subsystems, along with training and support spares, support and test equipment, and full documentation.

Current status
The project is now in the Acquisition phase being managed by the Ministry’s Acquisition Division with a dedicated project team of 8 personnel. Design activity is underway and equipment is being manufactured and/or procured. The first ship is planned to undertake the installation or refit phase in the 3rd quarter of 2016 and the second ship approximately 12 months later. The project is expected to be completed in 2018.

That is the one. They are still refining some of the detail so hope to hear something soon on what they need.
Top
Post Reply
5 posts • Page 1 of 1