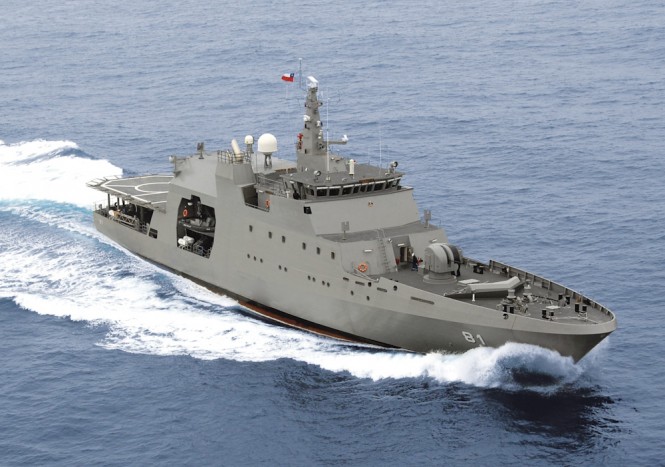 A design based on the OPV 80 (here the Chilean Piloto Pardo) by Fassmer is one of three that will be considered. Credit: Fassmer

The Request for Tender will require each tenderer to develop an Australian Industry Capability Plan around a local build and the use of Asutralian steel, according to Minister Pyne.

The Minister for Defence Marise Payne said the project is on track with construction starting in Adelaide in 2018 before moving to Western Australia in 2020.
Top

The multi-billion-dollar Offshore Patrol Vessel project has reached a significant milestone with the release of the Request for Tender to the three shortlisted designers.

The Minister for Defence Industry, the Hon Christopher Pyne MP said the Request for Tender will see Damen, Fassmer and Luerssen team up with Australian shipbuilders.

“The Request for Tender will require each tenderer to develop an Australian Industry Capability Plan that maximises the opportunities for Australian industry participation.

“The project is expected to create around 400 direct jobs and is part of the Government’s commitment to the continuous build of warships in Australia.”

The Minister for Defence, Senator the Hon Marise Payne said the project is on track with construction starting in Adelaide in 2018 before moving to Western Australia in 2020.

“These Australian-built vessels will form an important part of the Government’s investment to strengthen our maritime surveillance systems.”

Minister Pyne said this is part of the Government’s $89 billion investment in naval ships and submarines over the next 20 years which will see Australia develop a strong and sustainable naval shipbuilding industry.

That's a nice looking OPV !! What sought of crew numbers does one of them have Mike (as compared to our Armidales)??

Hi Bruce, that's one of the contenders, the Fassmer 80, in service with the Chilean and Columbian Navy's.

They are 80 metres long, displace 1800 tonnes, have a max speed of 22 knots and a range of 8,600 NM at 12 knots. Crew is a base of 30, rising up to 60 depending on aircraft operated and whether she is carrying a law enforcement / marine detachment. The Chileans operate her with a Dauphin helicopter, the Columbians with a Bo-105.

This is the Columbian version.

Interesting that the Fassmer 80 design can incorporate ice strengthening, which is a requirement for operations in the Great Southern Ocean.

Work on the OPV Cabo Odger is now well under way, said ASMAR. Ordered in January 2015 and launched in August 2016, completion is expected around April 2017, the company added.

Following on from Piloto Pardo and Comandante Toro (the first pair of the Fassmer OPV 80 design ships), the third and fourth ships include features such as an ice-strengthened hull to support operations in the cold and ice conditions of Southern latitudes.
Top
Post Reply
5 posts • Page 1 of 1