HMAS Adelaide in the news

HMAS Adelaide in the news

Apparently a team from HMAS Adelaide worked with Border Protection and the Federal Police to take into custody a 50 metre vessel off the coat of Tasmania.

The former marine research vessel with no registered home port was spotted by a RAAF Orion and tracked for over a week on a suspicious course down the coast of Western Australia, then round south of the Great Australian Bite, carefully avoiding any landfall before loitering well south of the coast of South Australia and west of Tasmania.

Acting on intelligence, the Navy was asked to intervene and took the vessel into custody, finding it with a crew of some 10 Chinese nationals and believed to be smuggling some $30 million worth of cocaine. Adelaide's crew took command of the vessel and brought it into Hobart.

The ship is now the subject of a multi-agency search operation as they check the ship for additional contraband and try and identify the crew.
Top

Re: HMAS Adelaide in the news

An update on this operation

Ten Chinese men face possible life imprisonment in Australia after being charged with trying to smuggle 186kg of cocaine with an estimated value of more than $60 million.

The group, aged between 23 and 50, were arrested after their 50-metre vessel was escorted into Hobart on Friday following a lengthy investigation at sea involving the military and border force.

A search of the boat, a former research vessel, took days and on Wednesday Tasmania Police assistant commissioner Glenn Frame revealed a haul worth about $60.45 million.

"Authorities located approximately 186kgs of the suspicious substance, which had been compressed into bricks and wrapped in plastic," Mr Frame said.

"Forensic testing has indicated the substance is cocaine, and further analysis will be conducted to determine the exact weight and purity."

The boat was first detected in international waters off Western Australia and was tracked south where suspicions were raised further as it started circling.

Border force personnel boarded the boat which was subsequently escorted by the navy's HMAS Adelaide into Hobart.

"The investigation into the origin and destination of the drugs is continuing, however it is unlikely that a criminal venture of this nature would target the small Tasmanian market," Mr Frame said.

Each of the crew has been charged with attempting to import a commercial quantity of cocaine, an offence which police said carries a maximum penalty of life imprisonment.

They remain in custody following a series of brief court appearances and are due to face a magistrate again on January 13.

"The vessel will remain in Hobart while (police) work with other agencies to undertake environmental and biosecurity procedures including the removal of fuel and food," Mr Frame said.

Re: HMAS Adelaide in the news

A nice shot taken after troops boarded the ship from Seahawk and ribs. 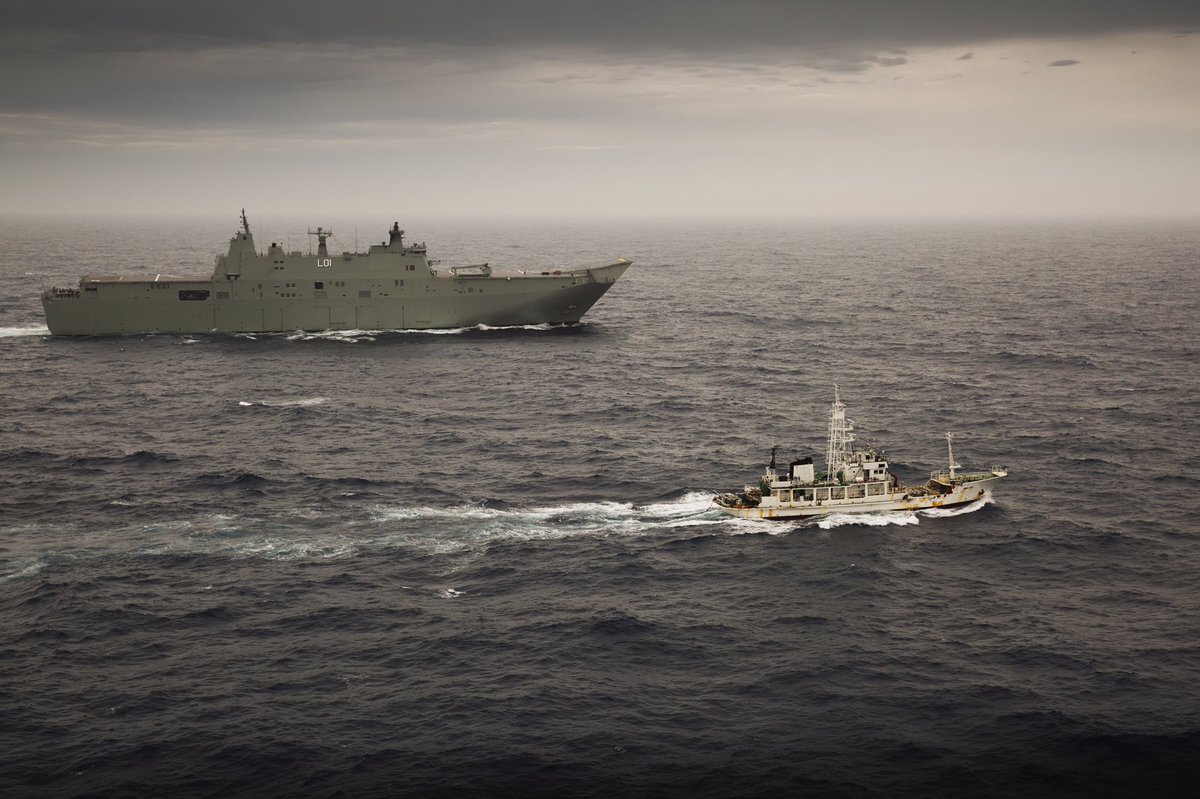