Russia confirmed earlier that the hull of the Liman, part of its Black Sea Fleet, had sustained a breach, with crew working to keep it afloat.
The cause of the collision is unclear but fog was reported in the area.

Turkish Prime Minister Binali Yildirim called his Russian counterpart, Dmitry Medvedev, to express his sadness over the collision, sources in the Turkish prime minister's office were quoted by Reuters news agency as saying. 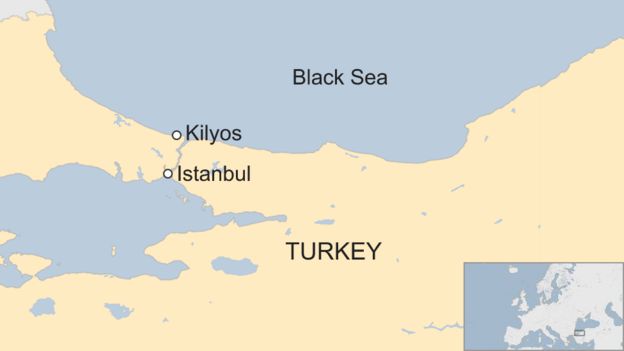 The Russian Black Sea Fleet (BSF) passes through the Bosphorus Strait for deployments in the Mediterranean, notably in Syria. BBC map

All 78 crew aboard the Liman were safely evacuated, the Turkish coastal authority said in a statement (in Turkish) on its website.

It collided with the Youzarsif H freighter, reportedly 29km (18 miles) from the Turkish town of Kilyos on the Black Sea coast just north of the city of Istanbul, and had sunk by 14:48 (11:48 GMT).

It was not clear whether either vessel was heading to the Bosphorus Strait at the time, Reuters news agency reports.

The BSF said the Russian crew had followed all the rules of sailing and manoeuvring and it suggested the incident had been caused by the other ship, Russia's Interfax news agency reports.

A former commander of the fleet, Adm Viktor Kravchenko, told Interfax the event was "out of the ordinary".

"There have been collisions but I do not remember a case like this, of a vessel, a warship sinking after it," he said.

The Liman was photographed passing through the Bosphorus in October

The freighter reportedly sustained minor damage in the incident.

Built in Gdansk, Poland, the Liman was launched in 1970, when it served with the USSR's Northern Fleet before joining the BSF in 1974, according to the kchf.ru naval website (in Russian).

Based at Sevastopol in Crimea, the territory annexed from Ukraine by Russia in 2014, it was a regular visitor to the Syrian port of Tartus for decades, the site notes.

In 1999, the Liman made international headlines when it was deployed to the Mediterranean to monitor Nato operations against Yugoslavia.
Top
Post Reply
1 post • Page 1 of 1