PD-50, Russia’s largest floating dock, is seen here during ongoing repairs to the aircraft carrier Admiral Kutnezov before the accident, during which the carrier was also damaged. It will take over six months to recover and repair. (TASS photo)

MOSCOW --- The operation to recover the sunken floating dock PD-50 in Murmansk will be rather tricky and may take six months to one year to accomplish, a source in the defense-industrial complex has told TASS.

Apart from the PD-50 Russia has another floating dock, PD-1, of approximately identical parameters in Severodvinsk. It is capable of accommodating large surface ships, such as The Admiral Kuznetsov or The Pyotr Veliki.

The floating dock of the 82nd repair plant in Murmansk sank the moment The Admiral Kuznetsov was being pullout out. Four workers suffered hypothermia and were taken to hospital. One of them also had a stomach injury. One person went missing.

The Defense Ministry concluded the repair contract with the ship repair plant Zvyozdochka in April 2018, hoping to have it back in 2021.

The heavy aircraft carrying cruiser The Admiral Kuznertsov, project 11435, joined the Northern Fleet at the beginning of 1991. Its full displacement is 59,100 tonnes, and length, 306 meters. It is capable of developing a speed of 29 knots. The Admiral Kuznetsov is armed with up to 50 planes and helicopters and anti-ship and air defense missile systems and artillery pieces.

I did read that one of those dock cranes collapsed onto the Carrier as it was sinking, caused significant damage.
Nige
Top

Russian Navy Has No Replacement for Sunken Drydock 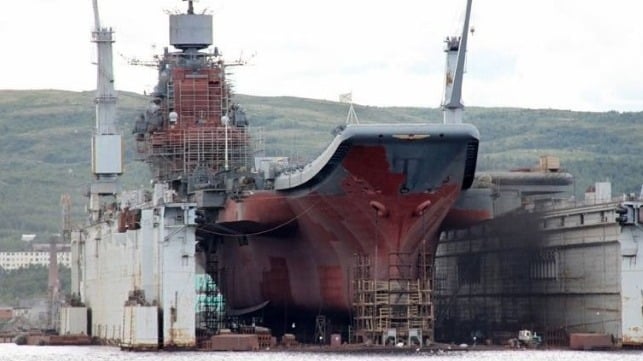 The Russian Navy does not have a domestic replacement with equivalent capacity for the giant floating drydock PD-50, which sank out from beneath the service's only aircraft carrier last month. According to United Shipbuilding Corporation CEO Alexei Rakhmanov, there are no other graving docks or floating drydocks in Russia with the capacity to handle the carrier, the aging Soviet-era vessel Admiral Kuznetsov.

The PD-50 was a key facility at the 82nd Shipbuilding Plant, located near the Northern Fleet's home port of Murmansk. The floating drydock was commissioned in the early 1980s, the same era as the Kuznetsov, and it allowed the Soviet Navy to service the carrier and other large vessels without building a new drydock on site.

On October 30, while the Kuznetsov was in drydock for a deep overhaul, an electrical fault caused the PD-50's ballasting system to malfunction, and its tanks filled asymetrically on the left (port) side. Its two cranes toppled over as it listed, and one of them landed on the Kuznetsov's deck. The Kuznetsov floated free without further damage, but the PD-50 sank to the bottom, coming to rest in about 30-100 feet of water.

Speaking to TASS, Rakhmanov expressed confidence that the loss of the drydock would not affect the maintenance and repair schedule for other Northern Fleet vessels. However, the Kuznetsov is a special case, he said. "As for the ships of the first rank, in the first place, this is the Admiral Kuznetsov, this creates certain inconveniences," Rakhamov acknowledged. "We hope that the issue of the docking of first-rank ships will be resolved in the near future. We are also preparing several alternatives, about which we will report to the Industry and Trade Ministry."

An attempt to refloat and restore the drydock is the likeliest option under consideration, but is likely to take at least six months, according to TASS. For now, the Kuznetsov has been moved to the 35th Ship Repair Plant in Murmansk. The crane from PD-50 damaged her deck plating upon impact, and in photos taken this week and released by Russian media, the crane's wreckage remained on board, aft of the conning tower.

The Admiral of the Fleet of the Soviet Union Kuznetsov, best known as the Admiral Kuznetsov, is a 55,000 tonne, 1000-foot-long carrier commissioned in 1990. She was built at the Black Sea Shipyard in what is now Ukraine, the only yard in the former Soviet Union capable of delivering carriers. She has suffered from a series of breakdowns over the years, including an electrical fire that killed one sailor in 2009; an oil spill off Ireland the same year; a loss of propulsion in the Bay of Biscay in 2012; and an aircraft arresting gear failure in 2016.

On overseas deployments, Kuznetsov has historically traveled with a fleet tug in the event that her trouble-prone propulsion system should fail. Her deep overhaul at the 82nd Shipyard is intended to address this deficit, and it includes the replacement of her turbo-pressurized boilers. The Russian Navy hopes that the retrofit will be complete by 2021 and will extend Kuznetsov's service life by another 25 years.
Top

It's lucky that she was able to stay afloat and didn't have large openings below the waterline from things like removed hull plating or sea chest valves, or from the shafts and stern tube seals being removed. Otherwise she could have sunk too and they'd really be in trouble.
Top

Came across two videos which show the Carrier prior to her short deployment to the Med in support of the Russian involvement in Syria a couple of years ago. The first seems to be a civilian guided tour, and the second is a strange mix of operations, and what appears to be a story by a reporter, following new conscripts joining Ship (if only I could understand Russian).
I actually felt depressed for the Crews, after I finished watching it. I will leave you all to draw your own conclusions....................and comparisons. The crash on deck in the second clip, to me, sums it up.