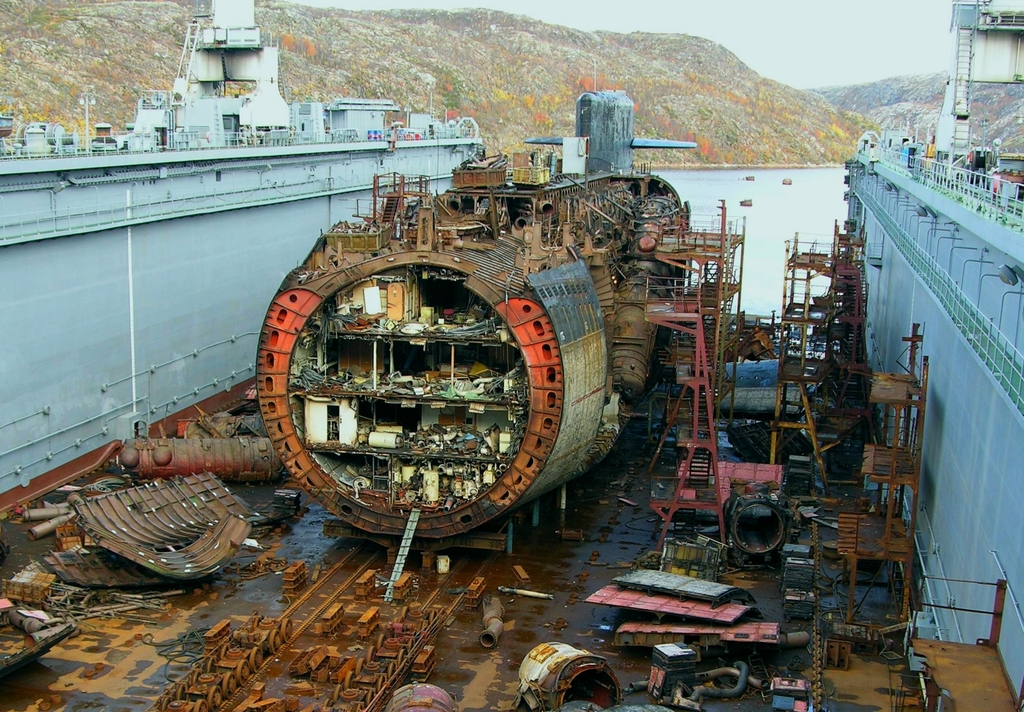 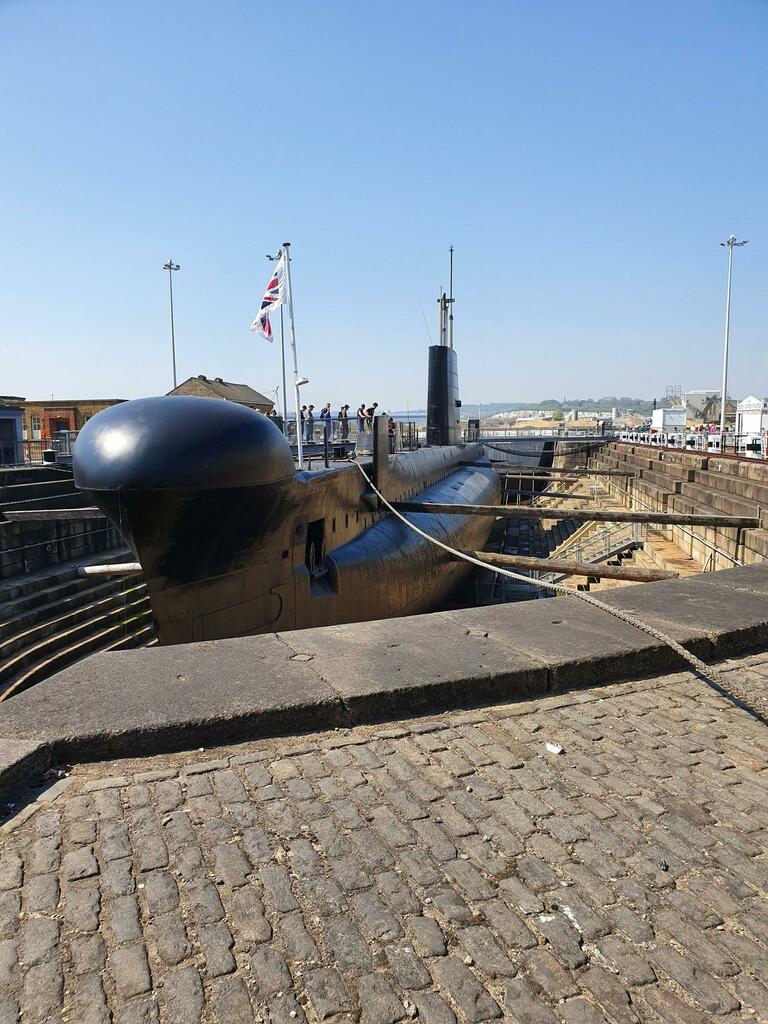 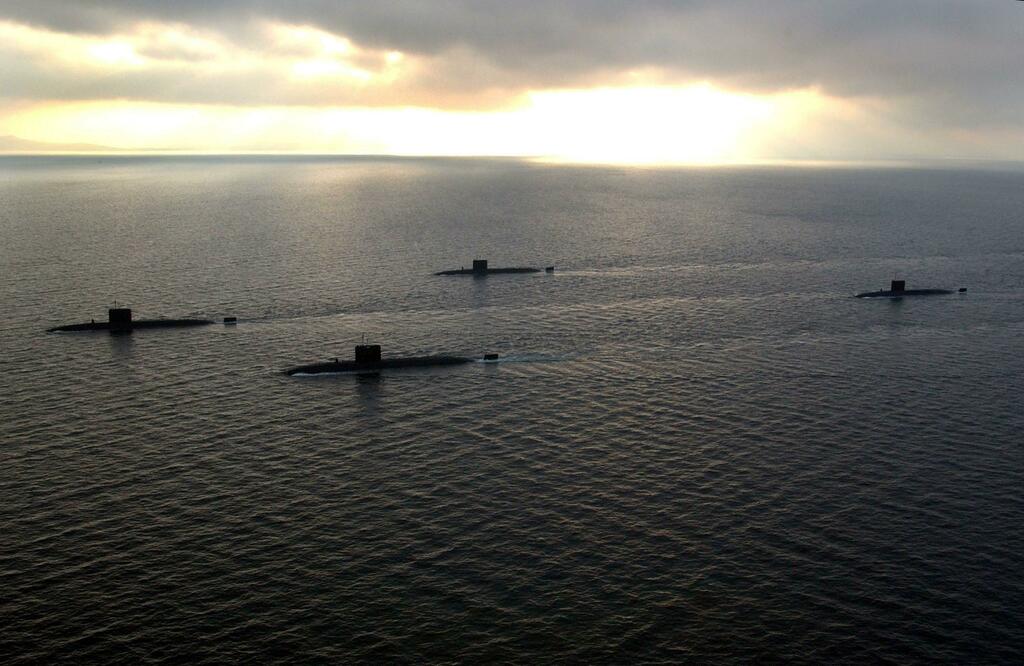 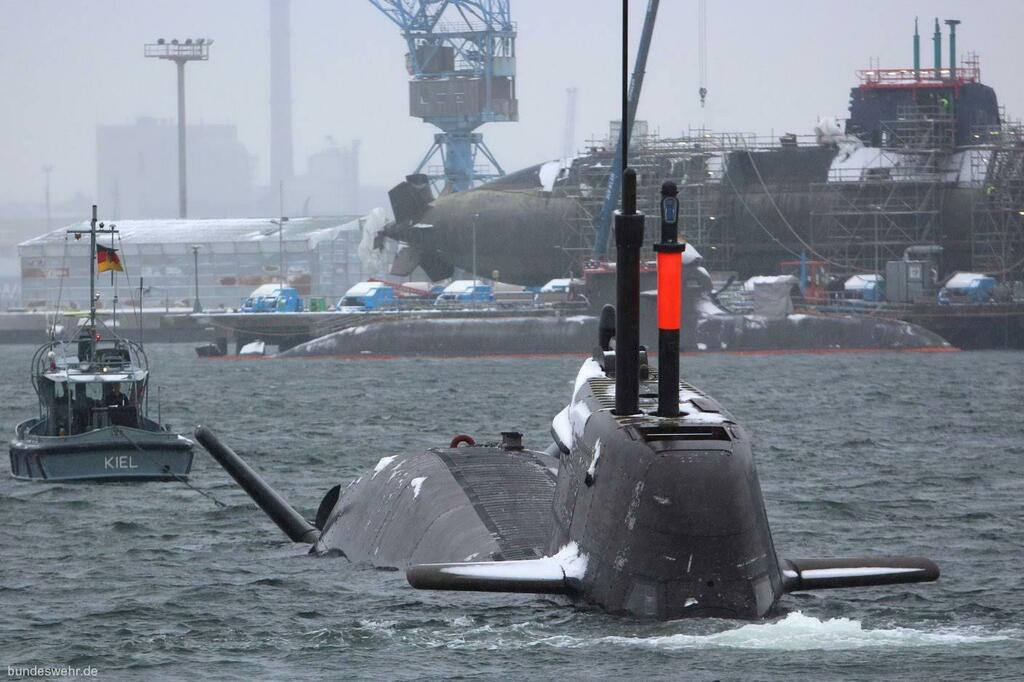 One of the first three Boreis class submarines, moored in front of the Dmitry Donskoi at SevMash; also seen is the heavy cruiser Admiral Ushakov which was retired in 2002 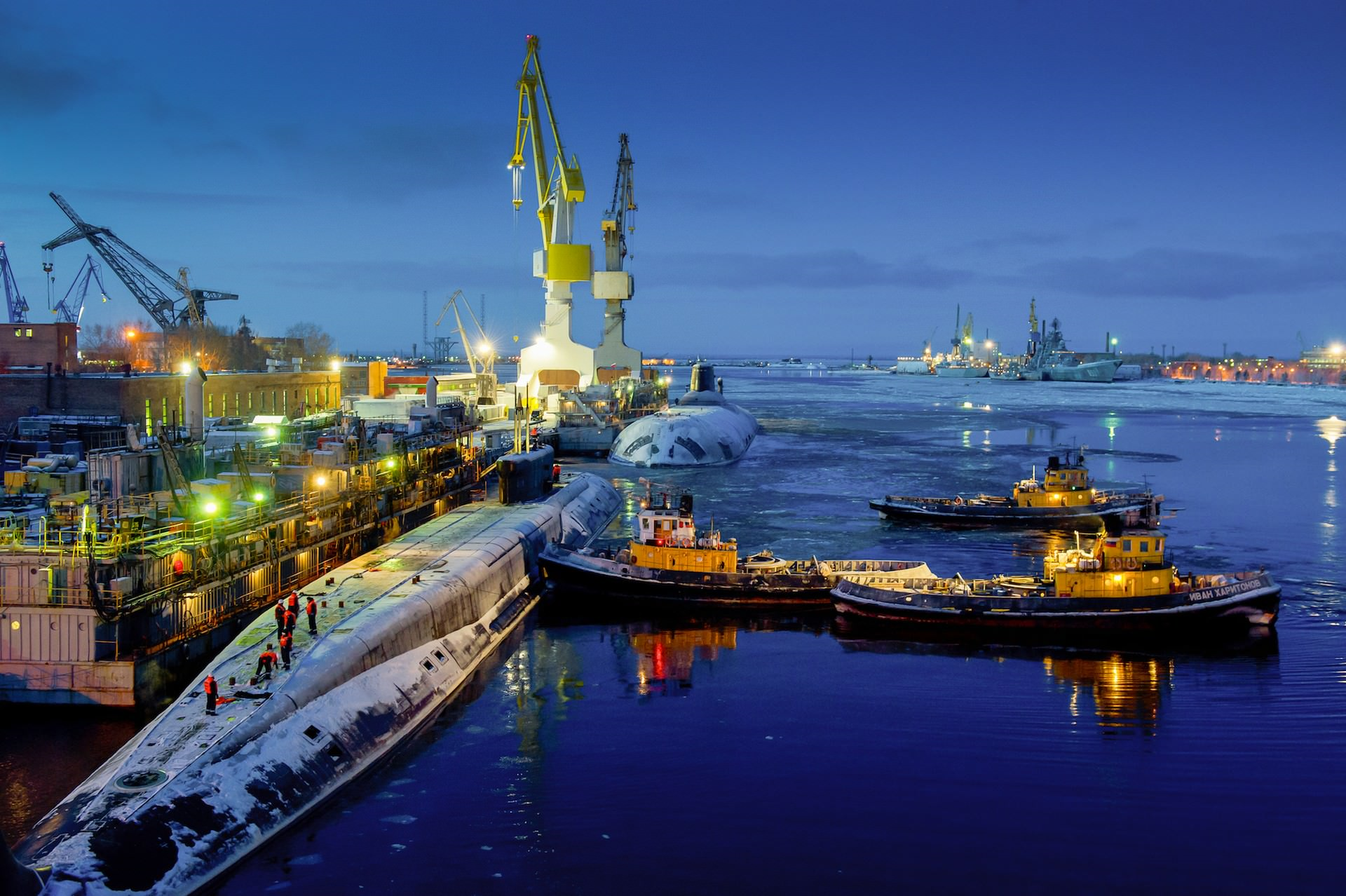 Here's a challenge - can anyone please try and locate for HMS Churchill a shot of her with her pump jet?
Churchill had her prop replaced by a pumpjet. This was the very first sub in the RN to trial a pump jet.

Cheers
J
He who dies with the most toys, just dies...you can't take it with you.
Top 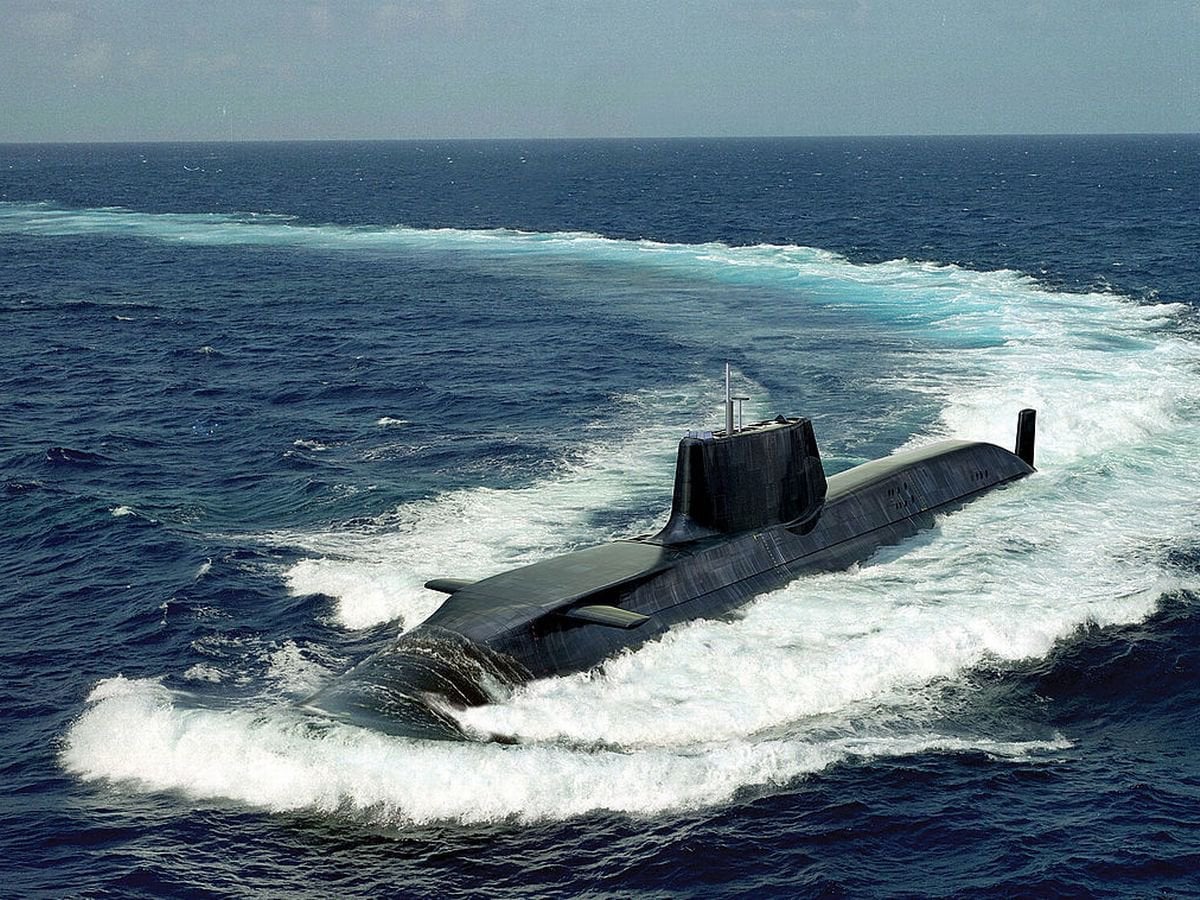 I chased up H I Sutton, one of the most well known authorities on subs and sub design, he stated that photos of RN pumpjets on Churchill, Swiftsure and Trafalgar Classes are extremely rare. As for shots of them out of the water, they make hens teeth look common.

The closest open source images he has are these ones, not helpful though. 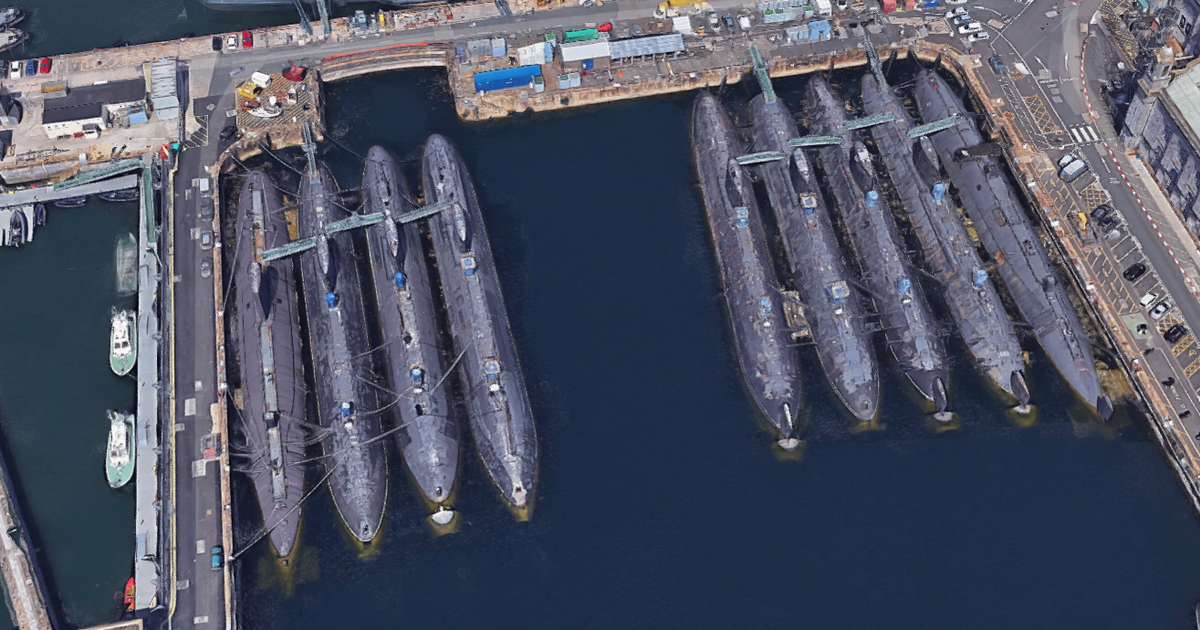 Thanks Mike,
figured that - but somewhere there might be something!

The sub at the top of shot in lower picture without a sail / c tower is a Churchill class - you can tell by the casing /hull shape and upper rudder- several of these boats are still awaiting disposal / dismantling.

Also - I think you might have located it -from your photo - this the Churchill class minus the sail. Note the structure aft (as poor as it is visibly) is too bulky to be a prop - this might be it.

Hi John,
The boat with the Sail removed is Warspite, the only one of the decommissioned Subs to have the structure taken off, (I do not know to this day why). Interestingly, the decision to take her out of service was driven by two factors. She was very nearly at the end of a multi-million pound refit, when an issue was discovered with her Reactor plant, the fix for which would of entailed yet more time in Dockyard hands, pushing the bill up substantially. (bear in mind that an SSN major Refit/Refuelling tended to take around two and a half years from Dockyard handover to RN taking the Boat back following acceptance trials).
This coincided with the collapse of the Soviet Union and therefore a drastic winding down of the threat level. It was therefore decided that the Boat should be decommissioned. Work stopped immediately, with Supervisors and Men all ordered off after work areas/systems were made safe.
I can confirm Warspite had a conventional screw at this time, but believe all Props were removed from the Boats that had them as part of the mothballing process.
Churchill is currently laid-up at Rosyth.
Nige
Top

littoralcombat wrote:Hi John,
The boat with the Sail removed is Warspite, the only one of the decommissioned Subs to have the structure taken off, (I do not know to this day why).
Nige

Nige - sorry I don't agree - I spent 2 days at Gosport museum, much of it chewing the ear of the curator with Conks questions. The curator told me that many subs during recycling have sails removed. Where sails are removed it could be due to corrosion of the structure / maintenance cost/ addition access etc etc/ or in the case of Conks (who for now has kept her sail) could be for museum artifact gathering etc. Valiant (has been canibalised to restore Courageous as a museum ship.
i.e.e.g. Valiant has had her sail removed too. She is at Devonport with Conks.

The UK has retired 20 nuclear pwd subs since 1980 and none have been disposed of, and only 9 of them have been defuelled. Unlike the Russian subs left to rot at piers the UK spends a fortune looking after them and when maintenance costs become prohibitively high, structures that are too costly to maintain that can be removed are removed.

The photo above is strange - there is a structure in the water aft of the boat, and if the prop was removed - which as you pointed out is SOP for recycling / laid up / awaiting disposal boats - what is it?

As far as where Churchill is now - do you have a photo with her sail attached?

Hi John,
You are certainly correct about the number of Subs that have had their Sails removed as part of the storage process. I almost forget sometimes that it is over sixteen years now since I left those Sunny shores.

Anyway, a quick trawl around the internet reveals many relevant images, although most are difficult to date, and it must be remembered that certainly at Devonport, the Boats have to be moved around a bit in 3-Basin as they go into Dry-dock for periodical Hull inspection/re-preservation.

Some piccys, second one of which in Devonport is the same as yours from a different angle. I am not sure what structure at the aft end of the one of the hulls you are referring to? Warspite, Conqueror with Sail & Valiant.
Next two are of Dreadnought and Churchill with Sails removed, together with Swiftsure.
Fifth one predates the third and fourth images in that Dreadnought still has her Sail.
Last and first are, I believe, Dreadnought.....now very long in the tooth. Before and after Sail removal.

Hi Nige
great info and photos.... so given that

and given we know that these ships have been moved around for maintenance storage etc, that it's possible that Mike's previous photo with red circle I placed around it could well be Churchy with some sort of pump jet still attached.

Hi John,
Alas, I think not. Mike's images are of the Boats stored in No3 Basin Devonport. Churchill was defuelled at Rosyth, her current location, she would of been 'driven' there by her crew prior to paying-off. She would of never made it into the 'Graveyard' at Guzz. The Boat you have red circled will be either Warspite or Valiant, depending on the photo date ( I am going with Warspite). The Hulls are indeed shuffled around by necessity at either Yard, but not from Yard to Yard. This would require a long distance tow, not deemed safe by the MOD(N) at this time....even in a defuelled condition

Interestingly, (you may be aware of this), but as well as being a Test Bed for the Pump-Jet, Churchill was also the first to be fitted with Anechoic Tiles in 1980, now a common feature on modern Subs of many Nations.
Unfortunately (for us Modellers), the UK was very good at maintaining secrecy surrounding these most secretive of Weapon Systems. As Mike indicates, underwater detail images of RN Boats from that era being rarer than Hen's teeth. Given that, it amazes me the detail shown in images of the Vanguards, and latterly the Astutes.
Having said that, I have an image of Warspite displaying her Prop somewhere, just need to find it.
Nige
Last edited by littoralcombat on 12 Jan 2020 08:43, edited 1 time in total.
Top 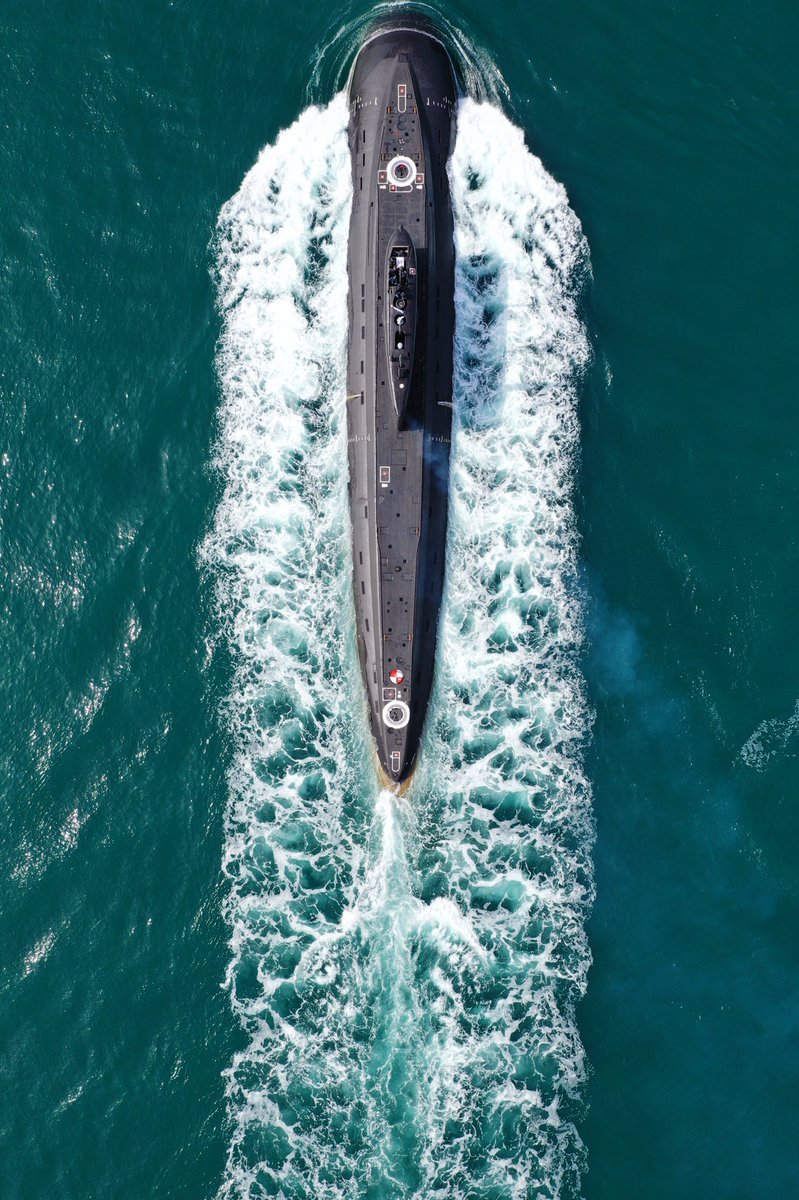 Two images of HMS Warspite alongside. First at Devonport, inb'd of a Swiftsure Class SSN, second at Faslane. Ballasted down For'd in order to expose her Prop, more than likely to allow for a little 'dressing' of the blades to make good the inevitable damage that can occur.
Nige

Did they shoot the person that took the second photo. i thought they would have shrouded the aft area to conceal the prop from prying eyes.
Cheers Glen
Top

glenhowells wrote:Did they shoot the person that took the second photo. i thought they would have shrouded the aft area to conceal the prop from prying eyes.
Cheers Glen

Well, as you probably know Glen, the first picture taken in Devonport shows the Boat opposite the married quarters in St Budeaux. (Weston Mill Creek in the background, as well as a Type 21 alongside in 'Frigate Alley'). No doubt a location frequented by many a Foreign Agent armed with fancy photographic equipment. I'd be interested to know the quality of the intelligence collected in this manner.
Nige
Top Got any more???
He who dies with the most toys, just dies...you can't take it with you.
Top

A German "Molch" type midget submarine on display at the Portsmouth Naval Shipyard, during the mid-1950s. It was disposed of in the early 1970s 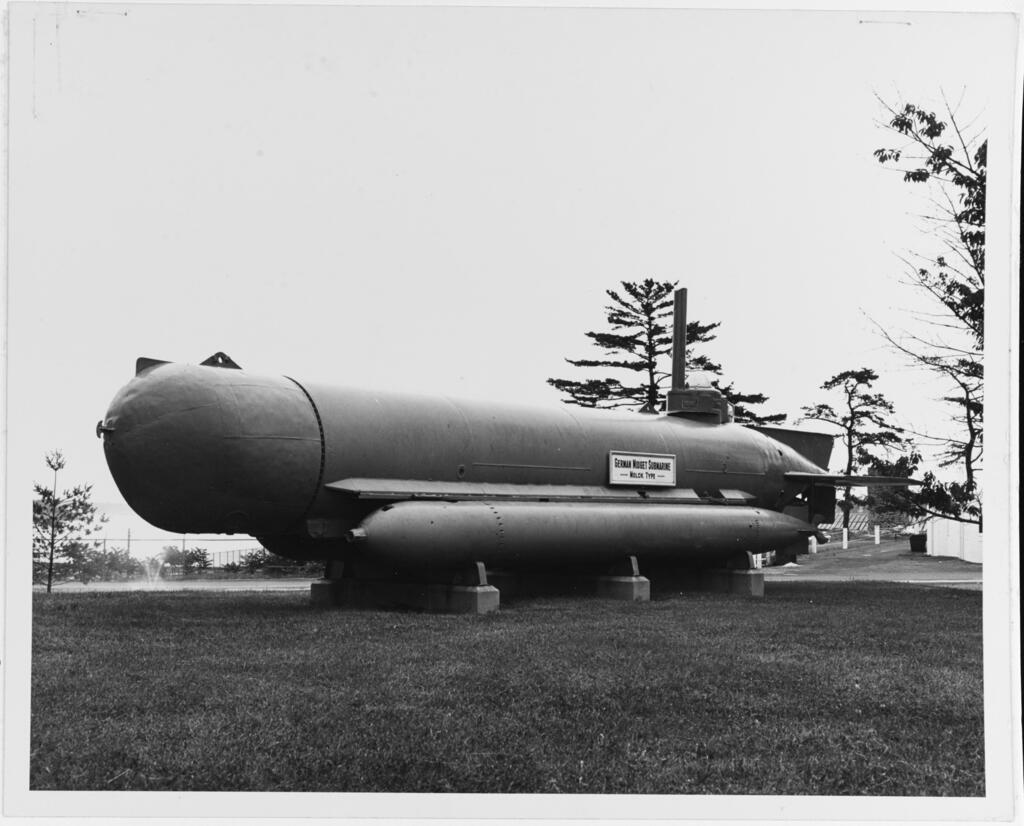 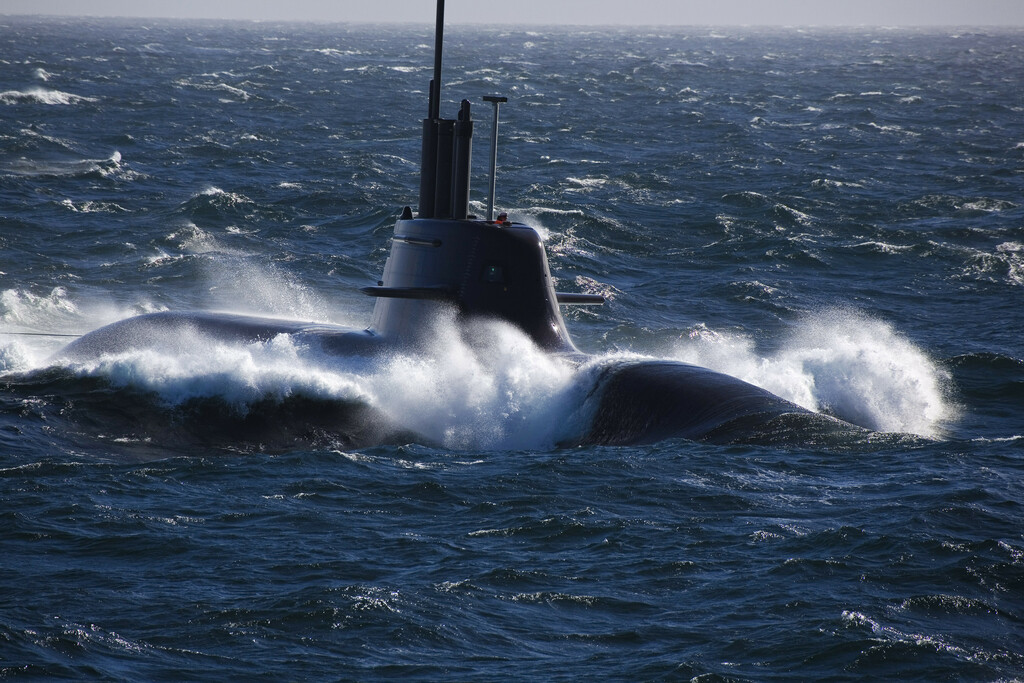 John,
You may of seen these before.
First is of Courageous with her original design of Propeller fitted. Second is the Propeller currently on display next to the Dry-Dock she is located in at Devonport in South Yard, which I assume is of the same design she might of finished her Service fitted with (although I can't confirm that). Third is a Propeller that is identified on the Plaque as being from a Resolution Class SSBN.

Thanks Nige.
Great info. The prop design for Courageous in your first photo is what OTW supply in their Valiant kit. I'm still chasing Conks prop from Falklands which I understand from info i got from my trip to Gosport was a 7 blade Smitar. 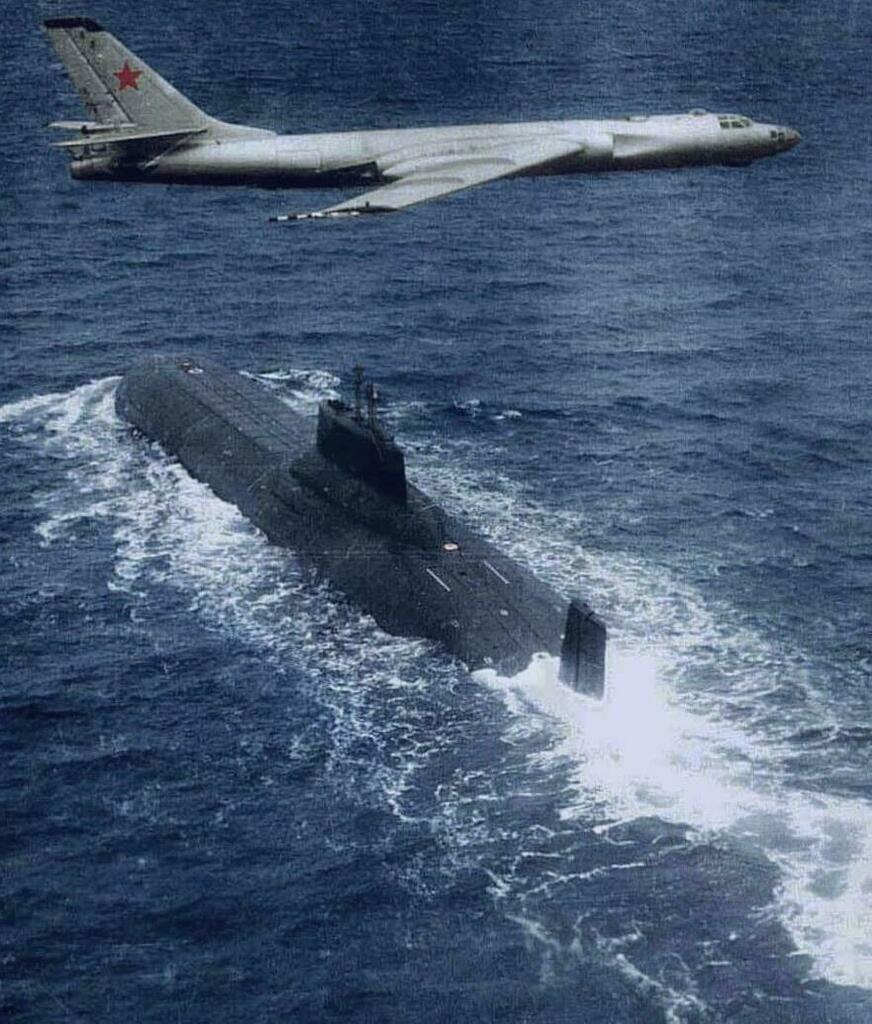 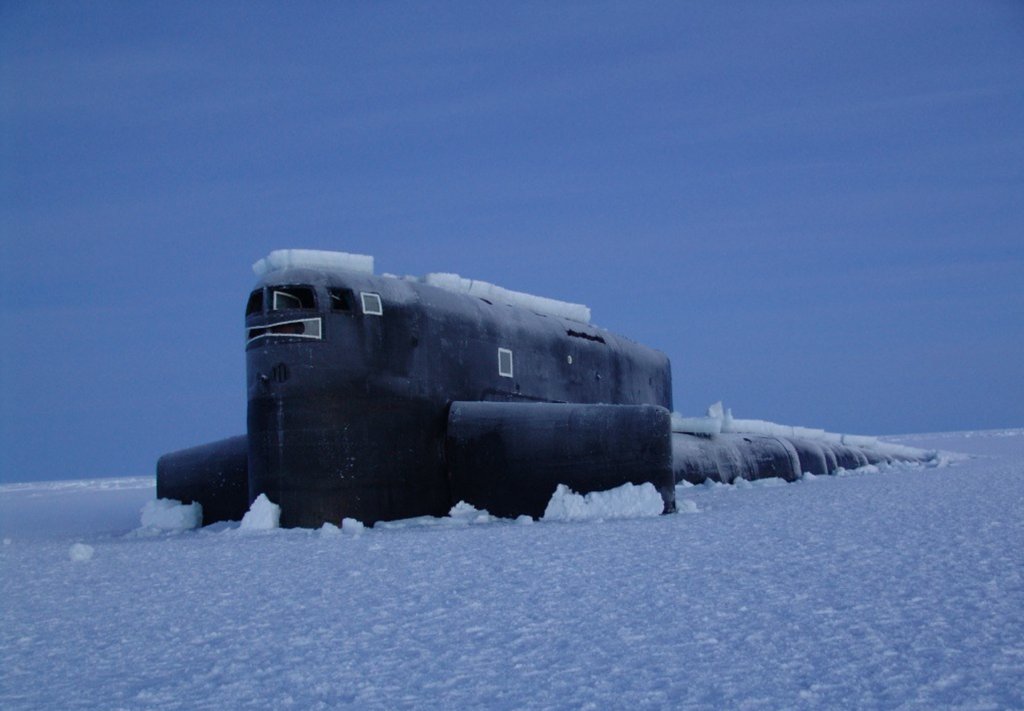 Project 941 Akula, NATO: Typhoon Сlass - Soviet sailors at the stern, 1986. Remember, this is pre the fall of the Berlin Wall, an amazing image when you think about it, given security concerns back then. 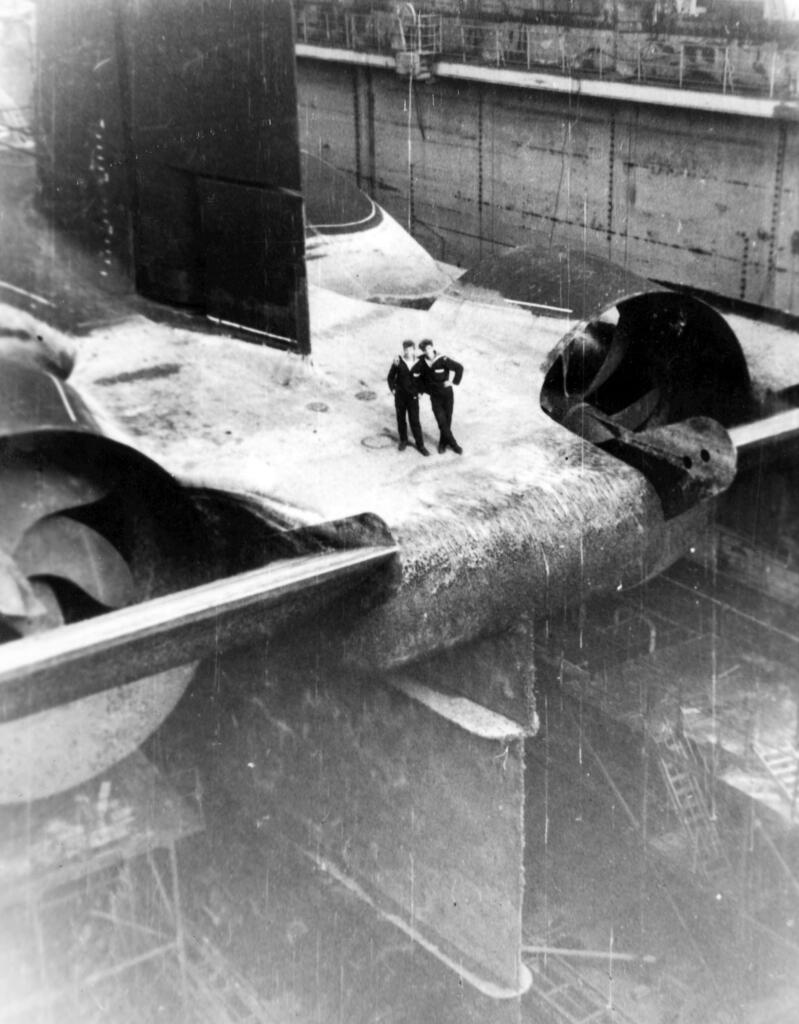 Dolphin demonstrating how its done to a Greek Navy sub 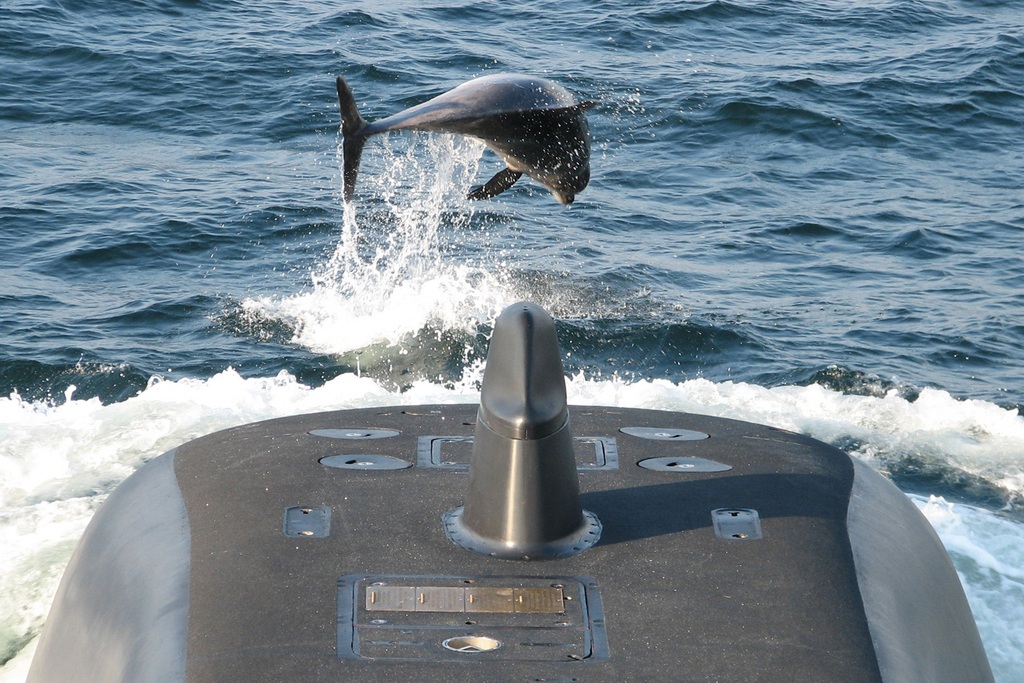 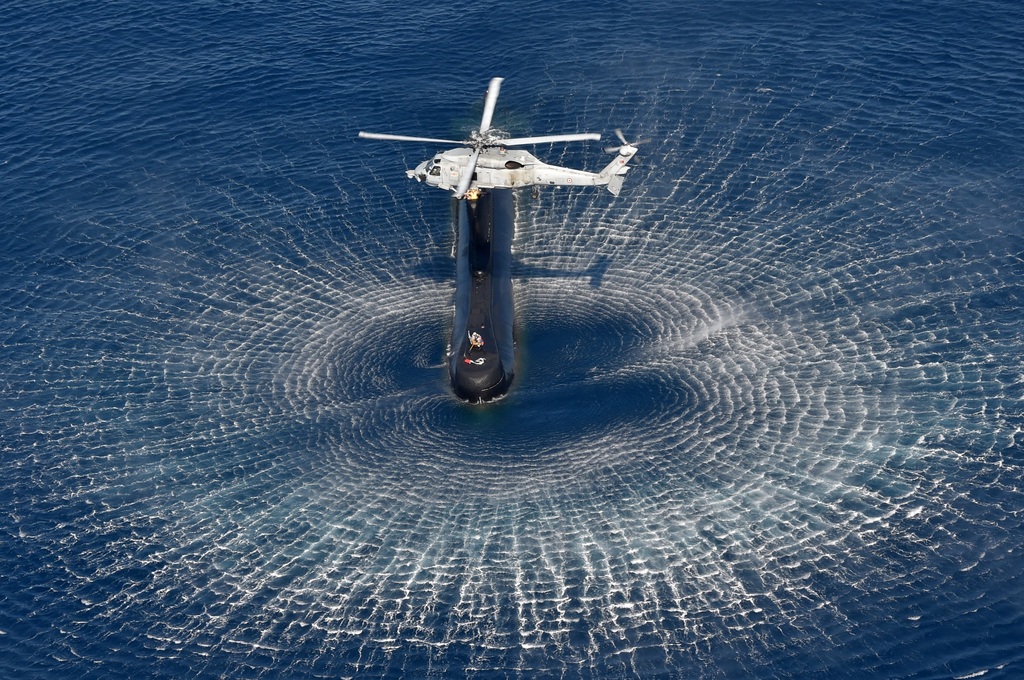