From the 'you have got to be f@%$ing kidding me' files. 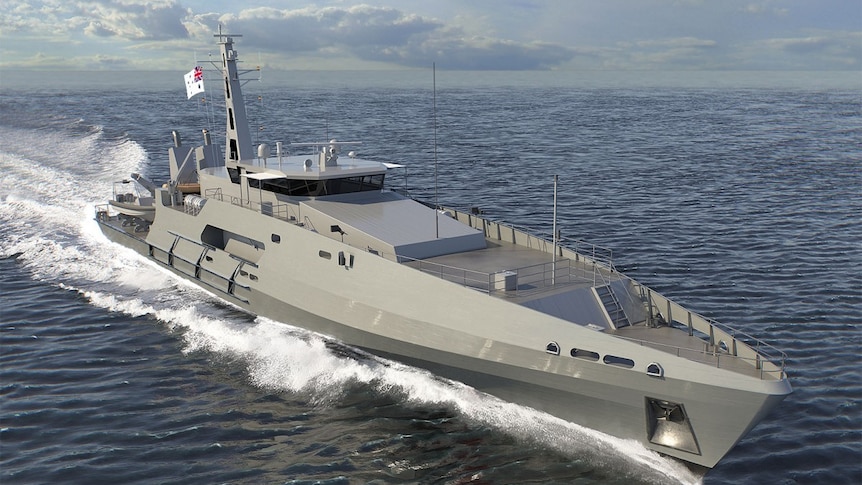 An audit report has shown delays on the boats have blown out.(Supplied)

The Royal Australian Navy expects its new Evolved Cape Class patrol boats could now be delayed by up to nine months, while an extra $44 million will need to be spent keeping its old fleet in the water, after poor-quality aluminium was imported from China.

In March the ABC revealed Australian shipbuilder Austal had detected deficiencies in the material, believed to have been sourced from Wuhan.

At the time Defence said it expected "the scheduled launch dates of all six boats to be delayed by between four and 16 weeks".

Now an Auditor-General's report has revealed the delays have been significantly upgraded to between six and nine months, partly because Austal is also struggling to recruit skilled labour.

"The ANAO's [Australian National Audit Office] comparison of the date ranges provided by Austal against contracted dates indicates that delays of between six and nine months are anticipated for all six boats' acceptance milestones," it said.

According to the ANAO, Austal advised Defence in June of "further schedule delays due to production workforce issues" in the $350 million project.

For the first time Defence has also publicly quantified how much the delays to the Evolved Cape Class patrol boats will cost in terms of keeping older Armidale Class boats in the water.

The ANAO said that in July this year Defence estimated delays would cost an extra $43.9 million.

"This has resulted in the planned extension of service of the Armidale class and a reduced in-service period for the evolved Cape class, demonstrating the consequential effect of project schedule delays to ADF capability and the Australian Government's naval shipbuilding strategy." "This, at a time when our nation's security is of critical importance," he said.

"This is an incompetent, wasteful government that cannot deliver Defence projects on time and on budget.

"As always, taxpayers are forced to foot the bill for their stuff-ups, and our Defence personnel are left without the capabilities they need, when they need it."

West Australian-based shipbuilder Austal was awarded the contract to build six of the 58-metre Cape Class vessels to replace the Navy's ageing Armidale Class fleet in May last year.

A month after the ABC revealed problems associated with the imported aluminium, Austal ended its joint venture with a Chinese shipbuilder called Aulong Shipbuilding.

Defence Minister Peter Dutton has been contacted for comment.
Top

Despite the issues previously mentioned, the first of Navy's six as yet unnamed evolved Cape Class, pennant number 314, has commenced sea trials.

POSTED ON TUESDAY, 28 DECEMBER 2021 14:27
​​​​​​​
Austal Australia has commenced sea trials of the first of six Evolved Cape-class Patrol Boats under construction for the Royal Australian Navy.

Austal Australia is on track to deliver this first vessel in the first quarter of 2022, with the remaining five Evolved Capes in various stages of construction at the company’s shipyard in Henderson, Western Australia (Picture source: Austal)

Based on Austal’s proven 58 metre aluminium monohull design, the Evolved Capes include a number of enhancements that further extend the capability of the vessel and the fleet.

Crew capacity on the Evolved Capes has been increased by 10 people, and quality-of-life provisions have been enhanced, ensuring those who operate the new patrol boats have connectivity to the outside world.

Austal Australia is on track to deliver this first vessel in the first quarter of 2022, with the remaining five Evolved Capes in various stages of construction at the company’s shipyard in Henderson, Western Australia.
Top

Nice, as it ties the Cape name in with a previous RAN name, the Oberon class sub Otway, the casing and fin of which are preserved at Holbrook in NSW on the road to Victoria.