Indian warship sunk during 'day at sea' for military families

The heavily armed Indian navy frigate was equipped to do battle with enemy battleships and submarines, but it went up in flames as soon as it was hit … not by a torpedo or enemy vessel, mind you, but by a merchant ship.

The warship was returning from a “day at sea” for families of sailors and officers and was entering the Jawaharlal Nehru Port Trust off the coast of Mumbai on Sunday afternoon, the website said.

Video taken by a passenger aboard the INS Vindhyagiri caught the collision as it unfolded. Those aboard the navy ship can be seen scurrying nervously as the merchant vessel approaches the frigate.

The Cyprus-flagged MV Nordlake, which was leaving the harbor, narrowly missed another container vessel, the MV Sea Eagle, and as it turned to avoid the Sea Eagle, it slammed into the frigate.

The collision cracked the warship's hull near the waterline. Water rushed in, and a fire broke out in the engine room, the Indian Express reported.

The Mumbai Mirror reported that the Navy attempted to put out the blaze, but the added water served only to sink the ship faster.

The ship was towed into the harbor, but it sank Monday afternoon. Police said they planned to arrest the Nordlake’s captain, according to the Indian Express. 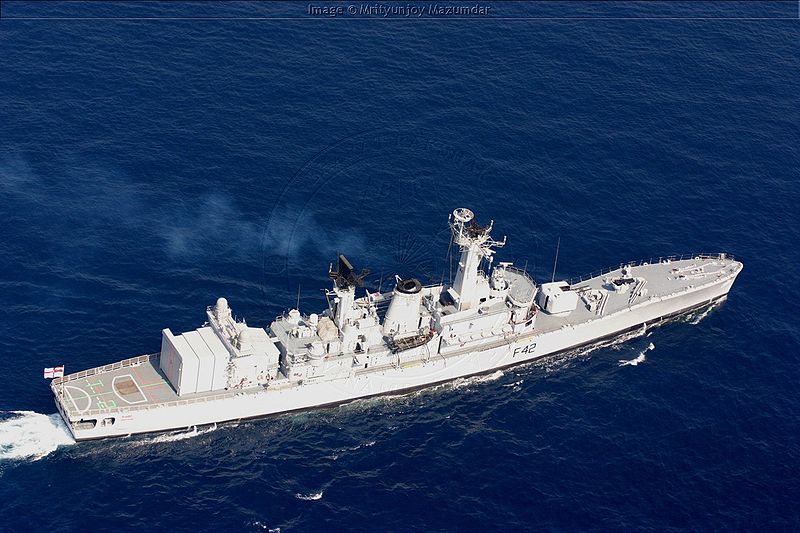 On April 22, 2006 INS Prahar collided with a container ship MV Rajiv Gandhi, and sank off the coast of Goa. No one was injured in the accident. The commanding officer of the ship, Lieutenant Commander Yogesh Tripathi was found guilty of negligence by an Indian Navy court-martial, and dismissed from service.

Holey crap, that's the sister ship to my model INS Taragiri F41, now she's an only child ! lucky I chose to model Taragiri,
what with HOOD I could have been seen as a modeling disaster zone.

alienpew wrote:.......
what with HOOD I could have been seen as a modeling disaster zone.

dunno about the modelling part Al- its the driving at times that's scared bejezzes out me.

He who dies with the most toys, just dies...you can't take it with you.
Top

Mike's building a freighter, so change the number on Tarawhatsit & we can have a re-enactment.

was burning merrily on the website I went too.
Top

MichaelB wrote:Mike's building a freighter, so change the number on Tarawhatsit & we can have a re-enactment.

- can see it now
He who dies with the most toys, just dies...you can't take it with you.
Top

London, Feb 2
A press report, dated Feb 1 states: Senior officers in the naval headquarters were embarrassed and were still trying today to map the sequence of events that led to the sinking of the frigate, the INS Vindhyagiri, off Mumbai. Two inquiries have been ordered, one by the director-general of shipping and the other by the Western Naval Command.But even before the findings, there are suggestions that the Vindhyagiri lost its way in the buzz of communication between two merchant vessels, the fully cellular containership Nordlake and the Sea Eagle, each heavier than the frigate. In the sequence of eventsnarrated by one navy source, the Nordlake and the Sea Eagle were in communication over the radio. The Vindhyagiri was listening in. The Sea Eagle was sailing behind the Vindhyagiri and both were heading into port while the Nordlake was heading out. According to the "rules of the road", the officer said, when two ships are approaching from opposite directions, they should be sailing past keeping each to the left of the other. However, the Nordlake and the Sea Eagle agreed over the radio that because of their positions, they would sail to the right of each other. The Vindhyagiri was still ahead of the Sea Eagle, which was attempting to overtake it. At the last minute, however, the Nordlake decided to go by the book and turned towards the Vindhyagiri.The warship's crew had little time to respond and the vessel was hit. The Nordlake cut a hole into its starboard and water gushed into the frigate. The navy still had time to tow the Vindhyagiri to a berth when a fire broke out in the engine-room. While the personnel hosed the engine-room, water continued to build up inside the ship and it started sinking. The navy waited as the coast guard was asked to stand by, and evacuated the crew and sailors. "This is what we know so far, but we are looking into the details of the communication, the functioning of the vessel traffic monitoring system and what kind of confusion resulted from the "cross-talk"," the officer said. The Vindhyagiri is now resting on the seabed with its mast visible. "The recovery process is on," a navy source said. "We have started pumping water out of the ship." When contacted this evening, coast guard spokesperson Mukesh Purohit said in Mumbai: "The oil spillage has been contained now. No further spillage has been reported today. A river boom has been put around the ship to collect the oil. The DG (director-general) shipping has convened a meeting of all agencies tomorrow to begin investigations into the incident."
Top

Something funny about the on board video, ok its only one vantage point, but there seemed to be ample time for the INS to take evasive action - it might not have worked, but the INS speed and course were constant the whole time.
He who dies with the most toys, just dies...you can't take it with you.
Top

You are off the hook Al, looks like it was geoff's fault.

MUMBAI: Investigators probing Sunday's collision between foreign vessel MV Nordlake and naval warship INS Vindhyagiri suspect that the failure of another warship from the convoy to follow navigational protocol caused the accident.

An official from the Yellow Gate police station said, "Prima facie, it appears that another Indian warship (INS Godavari) sailing ahead of INS Vindhyagiri did not follow the instructions. We suspect that the captain of INS Godavari failed to read the instructions given by the convoy's commander." ( Read: Warship listing after fire )

Chief public relation officer of Indian Defence, Captain Manoj Nambiar, said, "We would not like to draw any conclusions at this stage. All parties concerned are recording their versions. It will be better to wait till the probe is complete." ( Read: Cops look for ship collision footage )

Investigators, who have been poring over the statements of captains and crew of the two collided ships, said the leading naval warship had instructed the other vessels to follow her to Indira dock.

However, it is believed that INS Godavari, which was moving ahead of INS Vindhyagiri on the extreme right end, was not in sync with the convoy. "This created confusion between other vessels and MV Nordlake, resulting in the collision," said an official requesting anonymity. ( Read: New norms to avert port collisions )

In a statement, captain of MV Nordlake, Petros Valneo, said, "We have provided the authorities with minute-by-minute detail of the situation leading to the accident. The lead ship of the naval convoy had given instructions to other ships about MV Nordlake's presence, and had asked them to let us pass from the right side."

Deputy commissioner of police (Port Zone) Quaiser Khalid said, "It is too early to comment. We are recording statements and collecting data before jumping to any conclusions."
Top
Post Reply
8 posts • Page 1 of 1