The Indonesian Type 209 submarine KRI Nanggala is missing and has not made contact. She is carrying 33 crew. 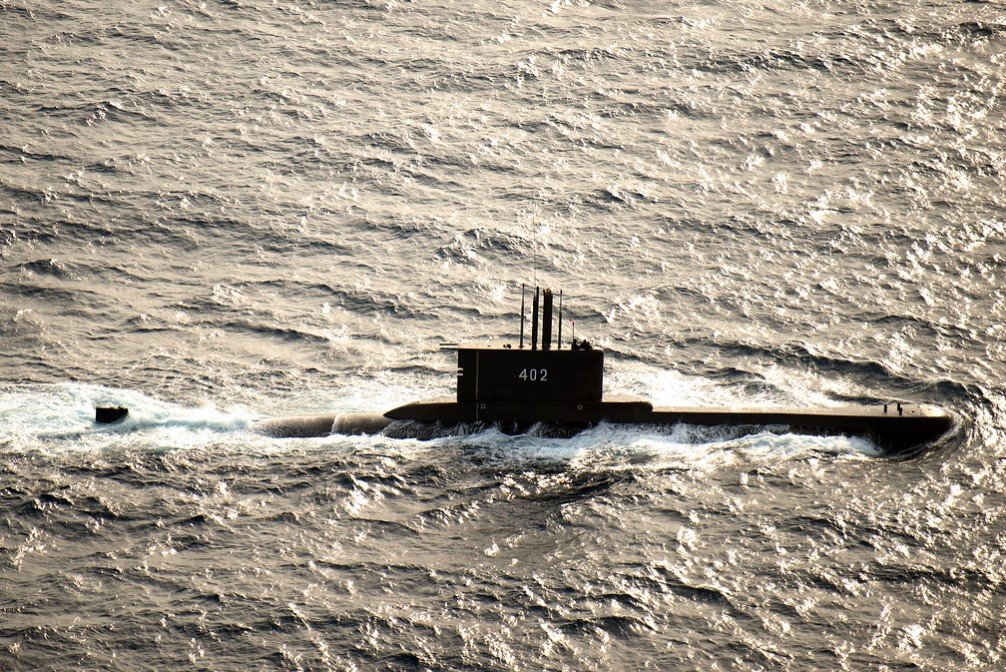 Her last reported position was North of Bali, she has missed several radio check-ins and has not responded to requests to break radio silence.

Here's hoping its an equipment fault, and that the Nanggala and her crew are safe.

More when I have it.

The Indonesian Navy has declared the Nanggala 'missing' in an area some 85km north of Bali, where the water depth is some 700 metres or 2296 feet deep. They state that the sub was carrying 53 people aboard. A number of Indonesian Navy vessels are heading to the area to commence a search.

The Indonesian Navy has stated that they have reached out to the Singaporean and Australian Governments for assistance, both countries have submarine rescue equipment which might be able to retrieve surviving crew if the sub can be located in time.

The depth is such that a rescue would be difficult, and would depend on the position of the sub and what, if any damage has been suffered in the initial accident and the subsequent impact with the bottom.
Top

Nangalla is officially missing, and a helicopter searching the area is reporting an oil slick has been sighted.

Australia operates two submarine rescue vessels, MV Besant and MV Stoker, but the trip from Stirling to Bali would take a week given their limited speed.

The RAN also operates an air transportable rescue submersible, which could be flown to Bali in a RAAF C-17 and then operate from a suitable ship on site.
Last edited by MikeJames on 23 Apr 2021 12:37, edited 1 time in total.
Top

Latest reports from the Indonesian Navy are that the sub's oxygen supplies will be exhausted by 3am Saturday local time.

Given no one has any inkling of the subs location, and if anyone is even still alive to be rescued, I am afraid that Nanggala must be considered lost with all hands.

The Indonesian Navy has officially declared the Nanggala lost.

There are reports that wreckage from a submarine has been found floating in the search area, including items tied to the submarine.

The search will go on, probably with a specialised search vessel utilising a towed side scan sonar, to locate the wreck, given the TNI operates an equally old submarine and they will want to know what happened and if it could happen again.

I would suspect there are voices suggesting that the Nanggala's sister sub should probably be withdrawn from service, given Cakra is 40 years old and went through the same refit that Nanggala had.

A very sad situation Mike. RIP all those lost.
I have to say that all Submariners command my utmost respect for the job they do.
Nige
Top

The wreck has been found, in three pieces on the bottom way past her maximum safe depth. R.I.P.

The Indonesian navy has located its missing submarine, KRI Nanggala, in three pieces at a depth of almost 840m, it said on Sunday night, confirming finally what had been feared for days — that all 53 people on board had perished.

The announcement has dashed the hopes of dozens of families that had been praying for a miracle after navy officials on Saturday left open the possibility there could be survivors from the maritime nation’s first submarine disaster.

The country’s military commander, Hadi Tjahjanto, told a Sunday evening press conference that the wreckage of the 44-year-old vessel, which went missing after submerging for a torpedo drill at 3am on Wednesday, had been located following the arrival of ships with more sophisticated detection technology.

Air Chief Marshal Tjahjanto said the equipment had captured images of the Nanggala wreck including its rear vertical steering wheel, anchor, the dive rudder as well as a safety suit that had been taken out of its box “as though it was about the be worn”.

“Based on this authentic evidence, we can conclude that the Nanggala 402 has sunk and that all the crew members are dead,” he said.

“Due to that, with great sadness, as military commander I declare the 53 crew members of Nanggala are dead. The best soldiers have died while carrying out their duties in waters north of Bali.

“On behalf of the entire military family, I convey my deepest condolences to the families of the fallen soldiers.”

He said all those on board would be decorated posthumously for their service.

Scott Morrison on Twitter expressed his “deepest sympathies to President @jokowi & all our Indonesian friends on the loss of KRI Nanggala. A tragic reminder of the ultimate sacrifice our service people make for their country. It was an honour to contribute to search efforts. Australia stands by you in your time of loss.”

Australian Defence Minister Peter Dutton said in a tweet on Sunday that Australia was “deeply saddened at the loss of the #Nanggala402 and the brave ­sailors who were on board.

“On behalf of our government, I want to convey my condolences to (Indonesian Defence Minister Prabowo Subianto) and the ­people of Indonesia. We stand ready to provide further assistance in any way that we can.”

The grim news came just hours after President Joko Widodo said all Indonesians were shocked by the disaster, and “(we express) our deep condolences, especially to the family of the crew members”.

Right up until the announcement, many relatives of those on board — 49 crew, three gunners and a commander — insisted they had not given up, despite experts saying for days there was little chance any could have survived the sinking of the German-built vessel, given it was not designed to go deeper than 500m.

Some posted heartbreaking messages on social media ­accounts. “Please keep fighting and be strong love, I believe you can rise up to surface,” wrote Mita Sofia on Instagram to her husband, First Sergeant Yoko Eki Setiawan. “I am waiting (for) good news from you. I can’t wait to see you back home and bring good news. A lot of people praying for you. Keep fighting my love.”

Navy chief Yudo Margono said the task would now turn to trying to lift the submarine to recover the bodies of those on board and investigate the cause of the accident, though he acknowledged that with the vessel now in three pieces and at a depth of 838m that would be difficult.

“There are some international friends who have offered to help with this but this will require a decision from the government. When the decision is made then we will proceed. The navy and submarine division have asked for the submarine to be lifted,” he said.

The Australian Navy’s sonar-equipped HMAS Ballarat was the first to come to the aid of Indonesia, steaming into waters 40km north of Bali on Friday to help with the frantic search for the Nanggala before it ran out of oxygen.

But the wreckage was finally located by Indonesia’s own KRI Rigel hydrographic survey vessel and confirmed by a remote operated vehicle deployed from Singapore’s MV Swift deep sea search and rescue vessel which arrived on Saturday.

Admiral Margono said while the vessel’s central hull - where the crew was believed to be - had remained largely intact, it had been “compressed” by the pressure.

Indonesian defence minister Prabowo Subianto had singled out Australia on Friday night, expressing his “tremendous gratitude” for its assistance in the ill-fated search.

Navy officials have insisted the 1395-tonne diesel-powered submarine was seaworthy, despite the fact it was still in service at least a decade after most submarines would be retired, pointing to a two-year overhaul the vessel underwent in South Korea in 2012.

Admiral Margono said he had ruled out human error for the accident “because during diving, it had already followed thorough procedure, and the lights were on.

“That means there was no black out at that point”.

Searchers are working on the theory that the torpedo tank cracked during the dive, causing the Nanggala to flood and sink to the bottom of a deep sea trench.

More than two dozen search vessels — including the HMAS Ballarat, a US P8 surveillance aircraft and deep sea rescue vessels from Malaysia and Singapore — had joined the search in waters where an oil spill was detected and a “strong magnetic resonance” up to 100m deep.
Top
Post Reply
7 posts • Page 1 of 1